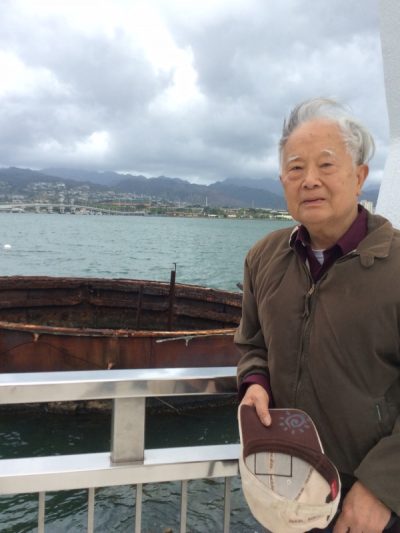 Chi-yun Chen, a devoted husband, father, and mentor, passed away peacefully in his sleep on December 1, 2020 after spending several quiet hours with his wife by his side. Professor Chen was a UCSB Professor Emeritus and a renowned scholar of Han Dynasty Chinese history and medieval Confucianism. His later research interests included East-West comparative perspectives on Chinese history and, Chinese and Western theories and approaches to history.

Chi-yun was born in Canton, China in 1933. His mother was a nurse, and his father was an educator and founder of LingNan Daily, a newspaper published in GuangZhouWan, China, until it was closed under Japanese occupation. Chi-yun’s own childhood was marked by the upheavals of World War II as well as the Chinese civil war, which resulted in his leaving mainland China in 1949 for Hong Kong and then Taiwan. After graduating from Taiwan Normal University in 1956, Chi-yun traveled back to Hong Kong to study with one of the greatest historians of China, Ch’ien Mu, founder of New Asia College in Hong Kong. In 1960, Chi-yun was awarded a fellowship to pursue doctoral research in Chinese history at Harvard University.

Chi-yun met Yvonne Yuen-han Chan in Hong Kong in 1959. During their courtship, he gave her a rose (which she still has pressed in her diary) and a copy of The Little Prince and told her that even though there are many roses in the world, only one is special to the little prince. They fell in love and married in 1962 in Berkeley, California, where Yvonne was studying architecture at U.C. Berkeley. After Chi-yun received his Ph.D. from Harvard in 1967, they settled in Santa Barbara, where he became a professor in the UCSB History Department, Yvonne practiced architecture, and they raised two daughters, Donna and Davina. Yvonne, Donna, and Davina vividly recall family discussions and debates around the dinner table about current events, world cultures, and the importance of pursuing truth and what that means in today’s world. Chi-yun was very proud to have raised two strong, independent daughters.

Chi-yun was a member of the UCSB faculty for twenty-seven years and achieved Emeritus status in 1994. During this time, Chi-yun continued to research, lecture, and teach extensively in China, Taiwan, Hong Kong, and Singapore, including serving as Visiting Associate Professor in the Department of East Asian Language and Civilizations at Harvard University (1973–1975) and Inaugural Senior Visiting Fellow at the Mok Hing Cheong Endowment for Chinese Studies at the Chinese University of Hong Kong (1981–1982). After attaining Emeritus status, Professor Chen received endowed professorships at Tsinghua University in Taiwan (1994–2004) and Nankai University in Tianjin, China (2004–2013).

His many publications include Hsun Yueh: The Life and Reflections of an Early Medieval Confucian (1975), Hsun Yueh and the Mind of Late Han China (1980), “Confucian, Legalist, and Taoist Thought” in The Cambridge History of China, and “Han Confucianism” in Encyclopedia of Chinese Philosophy, edited by Antonio C. Cua. In recognition of his expertise, Professor Chen was invited by the United Nations Educational Science and Culture Organization (UNESCO) to participate in conceiving its publication of a new History of Humanity and was one of three Chinese historians invited to write chapters on Chinese history.

In addition to conducting his own research, Professor Chen was a devoted mentor, working with countless students of Chinese history across many countries and directing doctoral dissertations until his retirement in 2013. Upon learning of his death, two of his students from Nankai University, both of whom are now on faculty at universities in China, wrote to Yvonne about the tremendous impact Chi-yun had on their lives. They explained that, under his guidance, they came to understand what is “knowledge.” In addition, they received huge spiritual and intellectual encouragement from him, strengthening their commitment to pursue academic paths.

The family thanks Drs. Linda Chen and Robert Harbaugh for their care and advice during the last years of Chi-yun’s life at home. They also express deep gratitude to all the caregivers and staff at Pacifica Memory Care and VNA Health for their loving care of him in the last year of his life. In lieu of flowers, the family would appreciate a donation in his name to the Institute of World Culture, Santa Barbara (worldculture.org), a non-profit organization with a group of dedicated people who share his passion for understanding world cultures; or to VNA Health a non-profit hospice agency in Santa Barbara.

Yvonne, Donna, and Davina feel at peace knowing that Chi-yun’s spirit is free from his physical body and happy that his academic work is being continued by his students. The family is planning a celebration of his life after the pandemic.

“Death is not extinguishing the light; it is only putting out the lamp because the dawn has come.” —Rabindranath Tagore