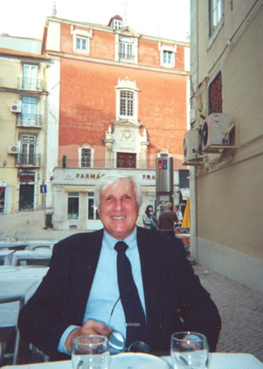 Frank Dutra should be remembered not only as a careful archival scholar of early modern Portugal and Brazil, superb mentor to generations of graduate students in the History Department and the Latin American and Iberian Studies program, but also as a kind and generous colleague.

Frank came to UCSB in 1967, shortly before completing his PhD in History at New York University.  UCSB was a new campus of the University of California system, but growing quickly.  He joined Philip Wayne Powell, a distinguished historian of Mexico, to create a graduate field in Latin America history. The two also helped found the interdisciplinary undergraduate B.A. and Master of Arts program in Hispanic Civilization, as a collaboration between the Departments of History and Spanish & Portuguese. It later became the Latin American and Iberian Studies program, with a larger interdisciplinary scope, where he was a stalwart member.

Frank’s scholarly work focused on the imperial, political and social history of colonial Brazil and early modern Portugal. He focused particularly on the military orders and their membership, social mobility in the Portuguese world, and gender issues.  The military orders were founded on the Iberian Peninsula during the lengthy Christian struggle against the Muslims, who had conquered virtually all Iberia by the eighth century.  The military orders of Christ, Santiago (St James), and Avis came to be wealthy and powerful, such that in Portugal the relatively weak and less wealthy monarchy sought to gain control over them.  Because of their rich documentation, the military orders are an excellent case for a historian interested not only in institutional history and power relationships but also the social history of a particular group.  As Portugal began its age of exploration, major players in that enterprise were members of a military order, including Prince Henry the Navigator and Vasco da Gama.  Although membership was a roster of Portugal’s elite men, Frank’s research also examined marginalized men of color and sodomites.  He published many essays on the military orders over the years, which were collected in a 2006 publication; one on sodomy and sodomites in Luso-Brazilian history (with Harold Johnson) was published in 2007. He also published articles in flagship journals of the field.  Frank contributed many articles to reference works, such as the Encyclopedia of Latin American History and Culture, The Christopher Columbus Encyclopedia, The Oxford Companion to World Exploration, Encyclopedia of Early Modern Europe, Medieval Iberia, an Encyclopedia, Encyclopedia of the Renaissance, The Historical Encyclopedia of World Slavery, and a number of reference works in Portuguese.  Those who have come of age in the digital era will likely not understand how important these works were then when it was so to find basic information in short form written for a general readership.  In many ways Wikipedia has supplanted these reference works and there are now many fewer such works. Editors of those earlier works could count on Frank to deliver succinct, well-written, signed articles that could answer many a reader’s questions.

A number of former graduate students shared remembrances of him as a mentor. Re-entry doctoral student Lee Goodwin writes “Frank listened with an open mind to our discussions and always broadened them in unexpected ways.  His comments were typically insightful, and he had a sly way of asking questions that pushed my understanding without making me think I’d missed the point of something.”  Cheryl Jiménez Frei (History PhD 2018) recalls, “I was very much a non-traditional student, and couldn’t have felt more like an outsider in academia.  It’s hard to express how helpful his encouragement and belief in me was in that first year of my graduate experience in LAIS. I wonder if he wouldn’t have been so open to help, if I might have given up and never have gone on to get my PhD. I owe a great deal to Professor Dutra, and can only hope to pay his kindness forward as I advise my own students now.”  His LAIS MA and History PhD student Anil Mukerjee (2009), now a faculty member at the U.S. Military Academy at West Point, was also a re-entry student. Anil had a previous career as an electrical engineer and computer scientist.  Frank recognized that Anil already had a deep connection to Portuguese overseas history, coming from his family’s connection to the former Portuguese colony of Goa. He saw in Anil both passion and potential.  Anil reflected on Frank’s role in his own career in the 2015 nomination letter of his mentor for the Latin American and Iberian Studies Lifetime Achievement Award. Frank encouraged him to persevere, even if initially he felt completely unprepared. “It was my ‘road to Damascus’ moment, a revelation not so much the possibility [of earning a graduate degree], but more importantly of the person I wanted to be.” Over a decade, cadets at West Point have benefited from Anil’s mentorship, his paying forward of Frank’s encouragement, kindness, and generosity.

Born in 1938 to Francis and Dorothy Dutra in New York City, Frank grew up in Warren, Rhode Island after the family’s move. He completed his B.A. at St Bonaventure University in 1960; he then entered the interdisciplinary program in Portuguese and Brazilian history at New York University.  He was fascinated with early Brazil, and, unusual for his time in graduate school, he was interested in Brazilian indigenous peoples.  During his long career, he delighted spending time in the archives in Portugal, also enjoying Lisbon’s cafes, and the country’s glorious historical sites.  Just short of retirement, he had a devastating stroke. Physicians put him in an induced coma for weeks, from which he awakened Lazarus-like.  His intellect was intact and he was eventually well enough to return home to his family. Alas, the lingering effects of the stroke affected his eyes, so that he was unable to complete the many scholarly projects that awaited his retirement. A devoted family man, he leaves his widow Mary Ann McIntosh, his daughters Barbara, Lissa, and Cristina Dutra, and stepchildren, Kerry, Richard, and Kyle McIntosh. He also leaves colleagues and former students who are grateful for his example as a scholar, a colleague, and a mentor.