Undergrads Cook Up Some Food Histories 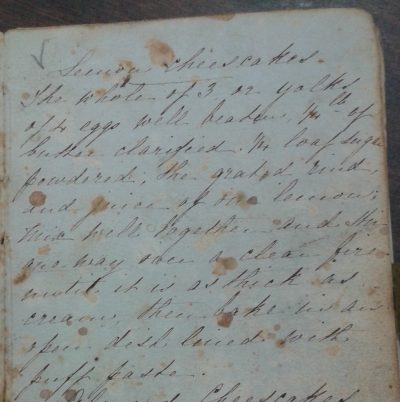 Rather than have her students write traditional essays in HIST 193F: Food in World History, Elizabeth Schmidt, a graduate student in history, had something else in mind for her summer session class: Historical Recipe Projects and Food History Museum Exhibits. The results were delicious. Have a look!

How did they do this, you might ask? Well, students who chose this task began by selecting a manuscript (handwritten) recipe from the eighteenth or nineteenth century. But before any baking took place they had to transcribe the recipe as well as research the recipe and its ingredients. Some ambitious students even attempted their recipes and recorded the process!

Below Megan imagines participating in the Great British Bake Off’s Technical Challenge, presenting her final “Boston Apple Pudding” to Prue and Paul, and receiving positive feedback! The recipe itself is from the 1827 collection of Susannah Blencowe, the daughter of a Northamptonshire sheriff in England.

Susannah Blencowe’s Boston Apple Pudding: Peel and core a doz and ½ good apples cut them small and put them into a stewpan that will just hold them with a little water a little cinnamon two cloves and the peel of a lemon stew it over a slow fire till quite soft then sweeten it with most sugar and pass it through a hair sieve. Add to it the yolks of 4 Eggs and the white of one a quarter of a pound of Butter half a nutmeg, the juice of one Lemon and the Peel grated, beat all well to gether line your Pie dish with good Puff paste before you put in the Materials, and bake it half an hour.

Here Milan presents a nineteenth-century recipe for “Lemon Cheesecake,” focusing specifically on making puff pastry for the first time! The recipe comes from the manuscript collection (ca. 1860s) of Mrs. E.A. Foord, the wife of a colonial official who spent time in India.

You try: The whole of 3 or yolks of four eggs well beaten ¼ lb of butter clarified ¼ loaf sugar powdered the grated rind and juice of 1 lemon; mix well together and Stir one way over a clear fire until it is as thick as cream then bake in an open dish lined with puff paste.

Watch Wolfgang prepare his “Bread Pudding” and experiment with new-to-him tools and techniques to create this boiled pudding with red wine sauce!

Recipe: Bread Pudding – [author unknown; potentially the wife of John Brown, Philadelphia shipbuilder]. Take of bread half a pound Newmilk three-quarters of a point pour the milk boiling hot upon the bread and let it stand about half an hour covered close then add three yallowes of eggs well beat a little nutmeg a spoon full rosewater a little salt and sugar beat the bread well and mix the whole well together tie it up close in a cloth and when the water boiles put it in it will boil in three-quarters of an our when on the dishpore over it some melted Butter mixed with wine and flour.

Lillian’s PowerPoint describes her experiment at making “German Puffs” and reminds us that while not every experiment is a “success”, failure can still be yummy! The recipe is also apart of Susannah Blencowe’s collection.

German Puffs – Susannah Blencowe (1827). Take a pint of cream to two ounces of flour, and four eggs, beat them well together, then melt two ounces of Butter
and mix it with a little Nutmeg and salt, a little orange flower or Rose water and a very little sugar Butter your Cases and fill them but half full, put them into a quick oven and they will rise. For a garnish Currant Jelly, Orange or candied Citron
For Sauce melted butter and white wine.

Here students chose a food-related topic and designed a museum exhibit around it. They selected five physical items (real or imagined) and wrote 200-word captions about each item as it related to their overall topic. Some even made video presentations of their items and exhibit.

This project showcases five “comfort food” dishes from different parts of the world. Did you know that Chicken & Waffles have a connection to the 1960s “Black Power” movement in the United States? Yes, food can also be a liberator and contribute to the process of redefining identity!