Cornell University Press recently published Professor Salim Yaqub’s new book, Imperfect Strangers: Americans, Arabs, and U.S.–Middle East Relations in the 1970s. Yaqub’s book argues that the 1970s were a pivotal decade in U.S.-Arab relations—a time when Americans and Arabs became an inescapable presence in each other’s lives and perceptions, and when each society came to feel profoundly vulnerable to the political, economic, cultural, and even physical encroachments of the other. Throughout the seventies, these impressions aroused striking antagonism between the United States and the Arab world. Over the same period, however, elements of the U.S. intelligentsia grew more respectful of Arab perspectives, and a newly assertive Arab American community emerged into political life. These patterns left a contradictory legacy of estrangement and accommodation that continued in later decades and remains with us today. 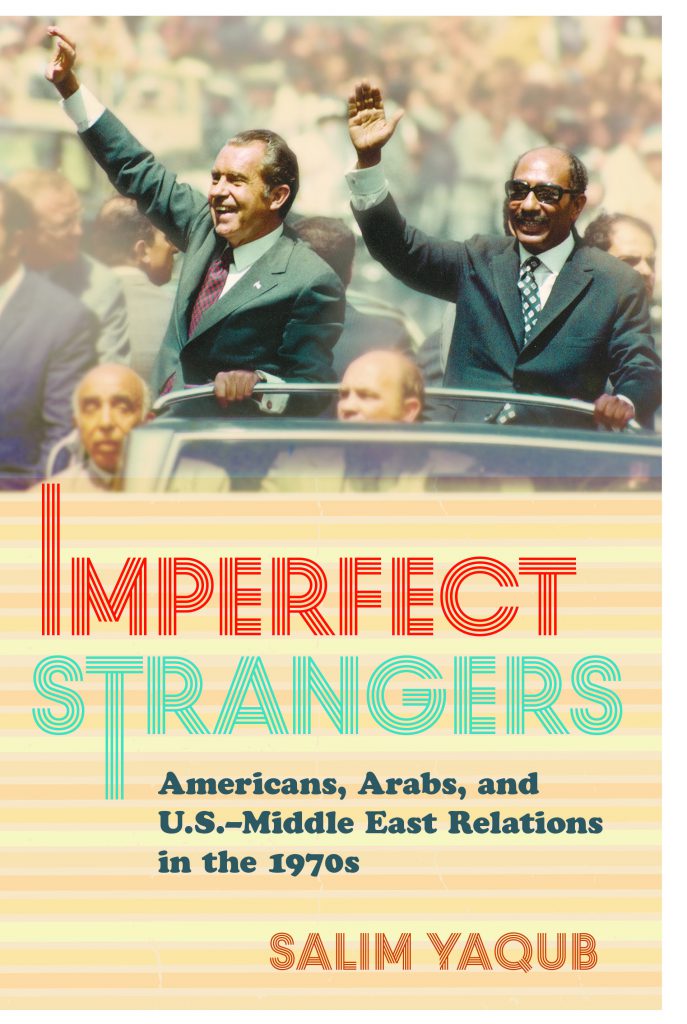 “Imperfect Strangers is a first-rate, highly original, and unquestionably important book. Salim Yaqub brings together consideration of high-level policymaking with analysis of American domestic politics and culture and persuasively argues that the 1970s mark a major—and mostly ignored—turning point in U.S.–Middle Eastern relations.”—Mark Atwood Lawrence, University of Texas at Austin, author of Assuming the Burden: Europe and the American Commitment to War in Vietnam

“Salim Yaqub has written a sophisticated overview of U.S.-Arab relations during that pivotal decade, the 1970s. Deftly, he examines both American foreign policy during that critical era and how Arab Americans responded to their government’s shifting positions. Given current concerns about ISIS, international terrorism, the fraught politics of the Middle East, and the heated rhetoric and high stakes surrounding the status of people of Arab descent in the United States as well as in Europe, Yaqub’s rich and compelling work could not be more relevant.”—David Farber, Roy A. Roberts Distinguished Professor of History, University of Kansas, author of Taken Hostage: The Iran Hostage Crisis and America’s First Encounter with Radical Islam

“Salim Yaqub’s Imperfect Strangers makes a compelling case that the Nixon, Ford, and Carter years marked a watershed in U.S. relations with the Arab world. During the 1970s, the United States emerged as the chief interlocutor in the Arab-Israeli peace process at precisely the moment when the Arab states were becoming more polarized than ever between moderates and radicals. Meanwhile, Arab Americans were becoming a force to be reckoned with inside the United States, not only as outspoken critics of America’s special relationship with Israel but also as increasingly well-organized opponents of what today we would call Islamophobia. By the end of the decade, these trends produced a truly ironic situation: reciprocal hostility between the United States and the radical Arab states on one hand and greater acceptance of Arab Americans by the U.S. public and mainstream media on the other.”—Douglas Little, Clark University, author of Us versus Them: The United States, Radical Islam, and the Rise of the Green Threat

“Salim Yaqub has written a profoundly original narrative about the troubled relationship among America, Arab Americans, and the Arab world in the critical decade of the 1970s. It is a stunning story of mishaps, misunderstandings, and willful foolishness. Yaqub challenges the conventional wisdom with impeccable scholarship, and his eye for the colorful anecdote is unerring. Imperfect Strangers is the perfect antidote to America’s perennial ignorance about things Middle Eastern.”—Kai Bird, author of The Good Spy

“Imperfect Strangers is creatively conceived, impressively researched, and beautifully written—a full rethinking of the history of U.S. relations with the Arab world in a crucial decade. Salim Yaqub’s attention to Arab Americans and their complicated political positioning is most welcome, a crucial corrective to scholarship that separates diplomatic history from the domestic politics of race. We need this kind of nuanced, innovative work if we are to understand the tangled history of the United States in the Middle East.”—Melani McAlister, author of Epic Encounters

“Elegantly traversing the realms of high diplomacy, social history, and cultural perception, Salim Yaqub draws on exhaustive research to build the bold but compelling argument that the 1970s was a transformative moment in U.S.-Middle East relations. Written with tremendous authority, humanity, and wit, Imperfect Strangers makes a crucial contribution to our understanding of the fraught and complex encounter between Americans and the Arab world.”—Hugh Wilford, author of America’s Great Game

“Imperfect Strangers is a brilliant book, impeccably researched and beautifully written. Salim Yaqub is a wise and judicious guide to the modern American encounter with the Arab world. Imperfect Strangers illuminates transnational history at its best, including U.S. foreign policy toward the volatile Middle East and the fascinating experience of being Arab American in the United States.”—Thomas (“Tim”) Borstelmann, author of The 1970s