Giuliana Perrone Speaks on Reconstruction-Era Courts and Legacies of Slavery 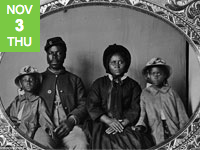 Giuliana Perrone, new Assistant Professor in the History Department, will give a talk at the IHC on the role the courts played in (re)constructing the lives of black families. Perrone will discuss the problems and possibilities Reconstruction-era courts presented to former slaves and the legal system in “Slaves into Citizens: Legitimizing Black Domestic Relationships in Reconstruction-Era State Courts” This talk is one of a series of lectures put together by the IHC’s Research Focus Group (RFG) on Slavery, Captivity, and the Meaning of Freedom. Perrone’s larger current project,”Litigating Emancipation: Slavery’s Legal Afterlife, 1865-1877,” explores the ways that slavery and the court system remained relevant after emancipation and how concepts of race shaped legal and political identities over time.

Department of History
IHC Slavery, Captivity, and the Meaning of Freedom RFG