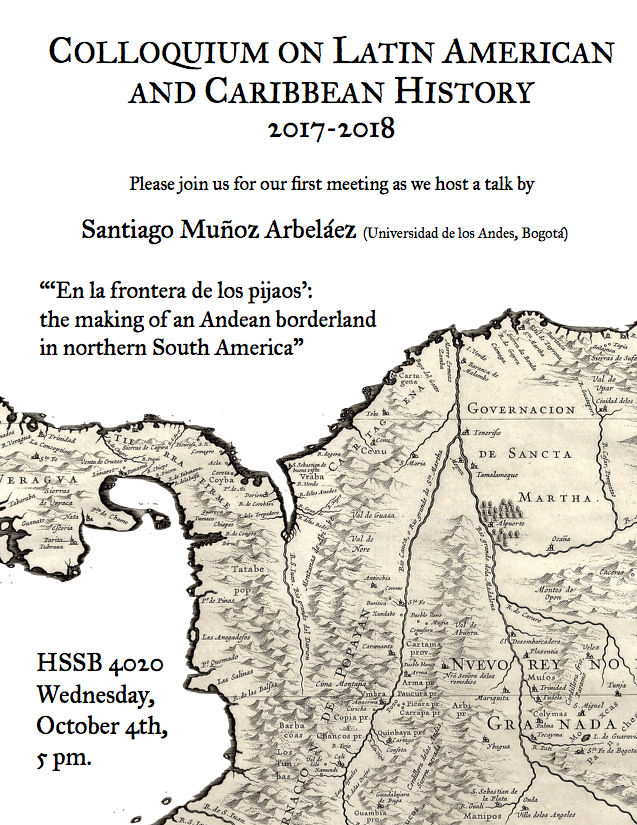 Please join us for the first meeting of the new Colloquium on Latin American and Caribbean History as we welcome Santiago Muñoz Arbeláez, who will deliver a talk entitled “‘En la frontera de los pijaos’: the making of an Andean borderland in northern South America”.

The talk will be held in HSSB 4020 at 5 pm on Wednesday, October 4th, and will be followed by a small reception.

Abstract: In the 1550s a coalition of native groups took arms against the Spanish empire in northern South America. The Pijao, as the imperial officials called the rebels, burnt cities, looted royal paths, and took captives. The officials of the empire classified the Pijao as caribes, accused them of cannibalism, and invoked theological arguments to justify their enslavement. From then on, interaction between the empire and the Pijaos was marked by violence, captivity, and slavery. By 1610, the president of the court of Santafé estimated that the Pijaos had destroyed fourteen cities and killed and eaten more than one hundred thousand indigenous allies. While the existing studies have depicted the Pijaos as pre-Hispanic warriors who survived due to their extreme cruelty, the Pijao frontier formed and grew in tandem with the empire. Far from being a static group that preceded the Spanish, the Pijao frontier was a novel political creation that grew as a reaction to Spanish conquest and its dynamics were intimately linked with those of the Spanish empire. This talk explores the birth, growth, and decline of an indigenous political project that emerged two decades after the conquest and expanded over the slopes of the northern Andes.

About the Speaker: Santiago Muñoz Arbeláez is Assistant Professor of History at the Universidad de los Andes in Bogotá, Colombia.