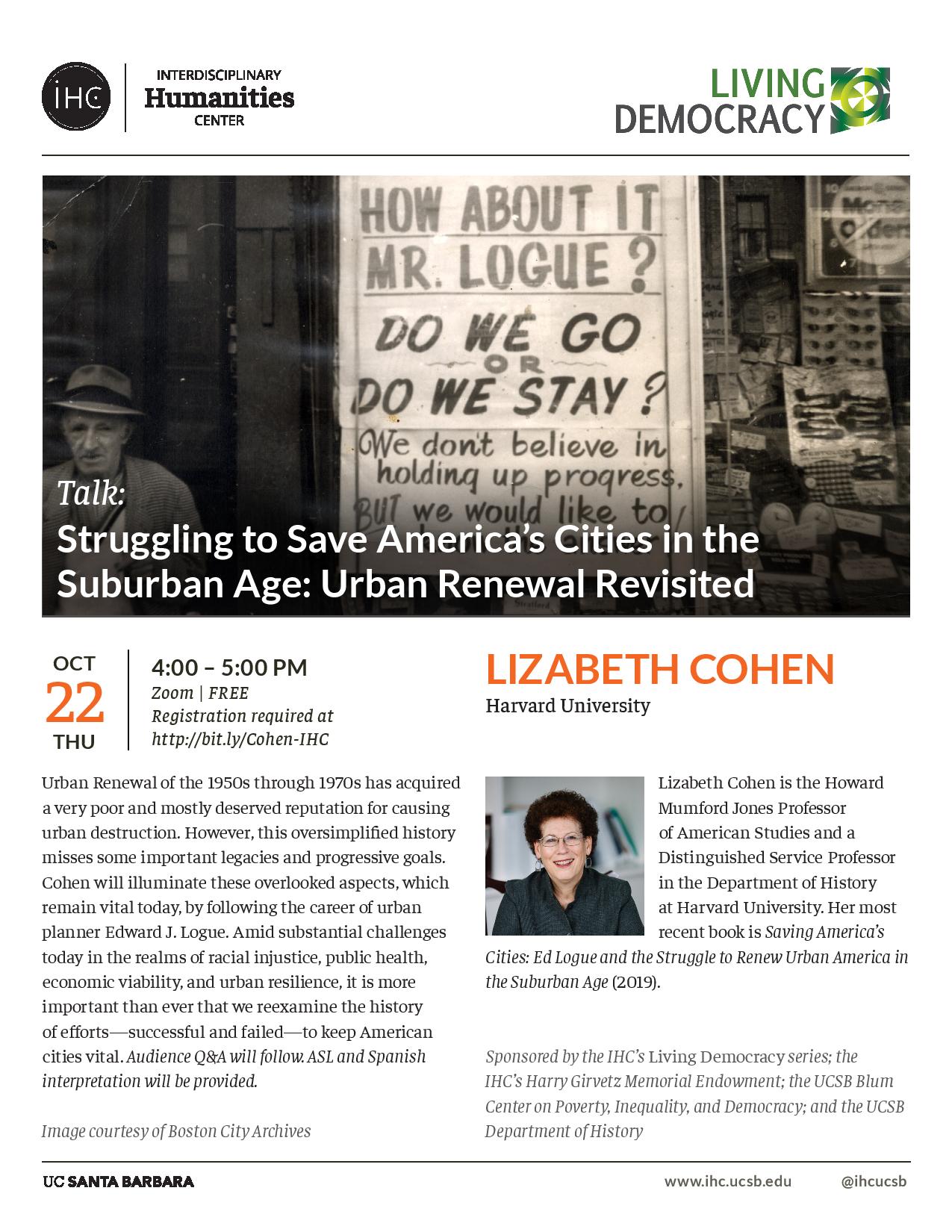 Urban Renewal of the 1950s through 1970s has acquired a very poor reputation, much of it deserved. But reducing it to an unchanging story of urban destruction misses some important legacies and genuinely progressive goals. Those include efforts to create more socially mixed communities, to involve suburbs—not just cities—in solving metropolitan inequality, and most importantly, to hold the federal government responsible for funding more affordable housing and other urban investments, rather than turn to the private sector. Cohen will revisit this history by following the long career of Edward J. Logue, who worked to revitalize New Haven in the 1950s, became the architect of the “New Boston” in the 1960s, and later led innovative organizations in New York at the state level and in the South Bronx. She will analyze the evolution in Logue’s thinking and actions, when and how he met resistance and accommodation by communities, and what he and many others who cared about cities learned in facing the challenges of urban revitalization during the suburban boom of the second half of the 20th century. Amid substantial challenges today in the realms of racial injustice, public health, economic viability, and urban resilience, it is more important than ever that we reexamine the history of efforts—successful and failed—to keep American cities vital. Audience Q&A will follow.

Lizabeth Cohen is the Howard Mumford Jones Professor of American Studies and a Harvard University Distinguished Service Professor in the Department of History at Harvard. Her most recent book is Saving America’s Cities: Ed Logue and the Struggle to Renew Urban America in the Suburban Age (October 2019), winner of the Bancroft Prize. It examines the benefits and costs of the shifting strategies for rebuilding American cities after World War II by following the career of urban redeveloper Edward J. Logue, who oversaw major renewal projects in New Haven, Boston, and New York State from the 1950s through the 1980s. Cohen has been a fellow of the Guggenheim Foundation, the National Endowment for the Humanities, the American Council of Learned Societies, and the Radcliffe Institute for Advanced Study. She is also a former president of the Urban History Association.

To learn more about or purchase a copy of Saving America’s Cities: Ed Logue and the Struggle to Renew Urban America in the Suburban Age, please visit Chaucer’s Books online.

Sponsored by the IHC’s Living Democracy series; the IHC’s Harry Girvetz Memorial Endowment; the UCSB Blum Center on Poverty, Inequality, and Democracy; and the UCSB Department of History

REGISTER NOW. ASL and Spanish interpretation will be provided. To view ASL interpretation, please attend the webinar on a desktop computer.